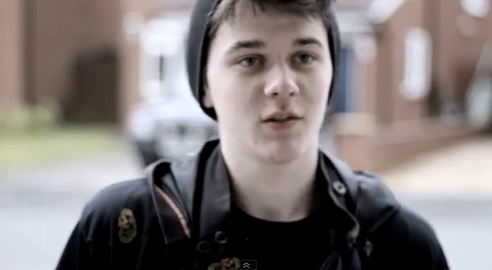 This is an audience profile that we have created based on our research that has been carried out. This is the typical person who we will be targeting with our music video, print advertisement and digipak.
Name: Kevin
Gender: Male
Age: Late Teens - Early 20’s
Class: D
Religion: Atheist
Education: College Level (Further Education)
Occupation: Shop Worker
Marital Status: Single
Income: Less than £10.00 an hour
Nationality: British or American

Psychographics:
Kevin is 18, has black dyed hair and works part time at the ASDA down the road from his house. He listens to music as an emotional escape from a stressful lifestyle that contains large amounts of school work and making decisions about his future. He is a confident boy, who attempts to live a hedonistic lifestyle, as his daily routine in life bores him. He feels trapped in his quiet suburban area as his school, home and workplace are all within 5 miles of each other. He longs to explore a busier and more exciting area and would like to go travelling at some point in his youth. He is an academic underachiever, but an aspirer in more creative areas because he strives for more freedom than he has at this current time in his life. He looks out mostly for himself and his small group of close friends.

He is curious in nature and is experimental with what recreational drugs he uses, and what clothes he wears. He hates his work uniform and sixth form dress code. He is an emotional character, but embraces the fact that you cannot be happy all the time. He is extremely social and enjoys being in crowds and making new friends at his local bar. He is easily described as masculine. He does not care about being clean or looking professional and will often go out in the clothes he slept in yesterday. He has a wide range of musical preferences, but enjoys something with an electric guitar and deeper meaning. His favourite band, as well as Kids In Glass Houses, is Panic at the Disco. He cannot stand reading popular teens novels and watching soppy films with trivial storylines. His favourite season is summer because it is a perfect opportunity to lie around being lazy with his friends.