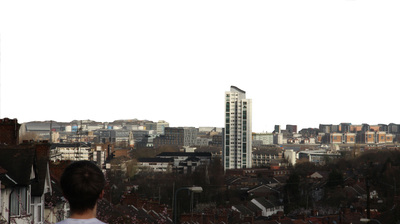 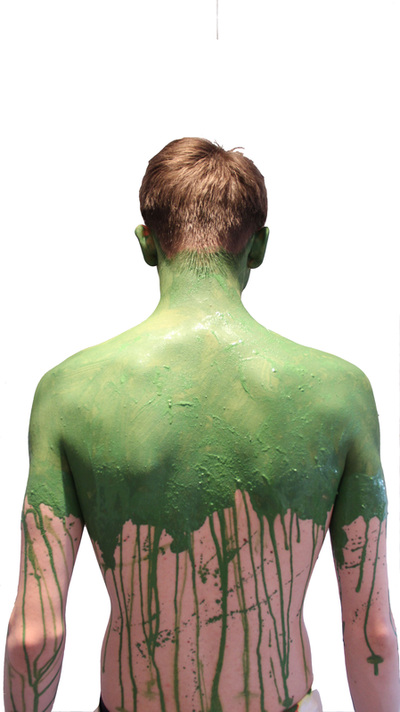 The above images illustrate the transition of development that we went through in order to create our finished print advertisement. We first took a picture of the London City skyline that was used in our music video at night and used Photoshop in order to cut out the sky. We then added another layer with the main protagonist on and turned up the colour balance and contrast levels to give us a a more realistic looking green that matched the colour seen in the music video. The skyline layer was then inserted onto the image of our star with the contrast being turned down to give it a very naturalistic look. The 'magnetic lasso' tool was then used to cut round the body in order to get rid of the remaining skyline layer, giving us the finished image. This wasn't such an easy process as it sounds due to encountering several problems along the way. For example, the lasso tool removing wrong parts of the photo when taking out the skyline image, as well as the layers not overlapping one another.

From our post production feedback, we were told by our peers that it may be a good idea to look into using a sky blue background, whether it be the actual colour blue, or an image of the sky that we have used across our digipak covers. This is so that it there was more brand identity between our three products. As you can see from the above image, we did take the feedback into account and experimented with different colours of blue, however, we did find that this took away the effectiveness of the dramatic main image and didn't really make the advertisement jump out at us. This wasn't just our opinion but our peers and teachers too. Although they suggested experimenting, it was realised afterwards that the colour does remove the effectiveness.

For this reason, we decided to stick with the white background in order to make the advertisement more eye-catching. We realise that it is unconventional to not have a background image but we have challenged it due to the effectiveness and the reason that our target audience like unique and out of the blue styles.
Our aim throughout the creation of the print advertisement was to stick with the theme of individuality and standing out amongst crowds. We also wanted to add 'mystery' upon our main star so that people want to see the music video, in order to find out about the story and the reasons behind using the image are. We also wanted our target audience to be able to take their own interpretations from the image.

The green paint dripping on the main stars back is meant to illustrate the transition of who he is to who he wants to be. You could also argue that it is a comparison of how the world sees him to how he sees himself living within the world.