Demographics; Actual statistical data that tells us about certain groups of people.
Psychographics; The interests and aspirations of different people and how these can be affected by the way they live their lives. 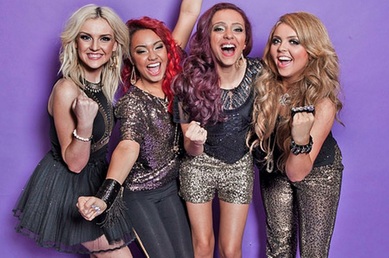 Little Mix is a girl band made up of 4 members, Perrie Edwards, Jesy Nelson, Leigh-Anne Pinnock and Jade Thirlwall. The band was created in 2011 when the girls auditioned for british talent show The X Factor. They auditioned as solo artists but were asked to join together as a band as the judges felt they were far better this way. They eventually became the first group ever to win the show, signing a record label contract with SyCo Records. Since their debut they have been increasingly successful. 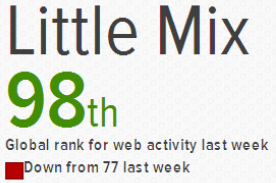 ^ We can see here that Little Mix is ranking in the top 100 most popular artists at the moment. This may be because their intended audience is younger and therefore more likely to be using the internet to keep up with their favorite bands. As a result of this, Little Mix are going to be rated as one of the most popular as MusicMetric.com get their statistics from websites such as youtube.com

^ We can see that Little Mix's fan base on Facebook has increased, as have their video views on youtube. However, people seem to be less interested in their actual songs as their plays have decreased since MusicMetric.com was updated last. This may be because Little Mix have grown more popular in celebrity status, and their songs are receiving less intrigue than their personal lives.

^ Little Mix has received more positive feedback from their fans than negative. This shows us that they are modern and popular artists at this time. However, this is not completely accurate because it is only based on the response received via social media, and not Little Mix's fans as a whole

^ This displays the sites that MusicMetric.com gets its data from. These are the websites where recorded searches for Little Mix are the highest. This shows that although their target audience is younger teens, Little Mix is also popular on websites that are designed for adult use, such as The Daily Mail and The Guardian's websites. This tells us that either Little Mix's target audience is far more sophisticated than we would think or that older people are also fans of Little Mix too.

^ This graph shows the decline in Little Mix's popularity in regards to how many downloads they are recieving per day. We can also see that the United Kingdom is the country that downloads Little Mix's songs the most. we can assume that this id due to the fact that Little Mix orginated from a British television show, there fore it is probable that their British fanbase would be larger. We can see this represented in the Top Cities list, wherein London (the capital of England) is the area that Little Mix is most popular.

^ This is my ideal audience profile. This is one singular example of the audience type of audience Little Mix's music is aimed at. The gender of the audience is more likely to be female because every member of the band is female and it is therefor easier for Little Mix to connect to a female fanbase. The age of Little Mix's audience is likely to be a young teenager, because Little Mix encorperate a lot of pink and girly editing in their videos. This type of editing is more likely to attract younger girls because older teens are more interested in breaking the 'girly' stereotype than relishing in it. It is the younger teenage girls who strive to 'fit in' and be as feminine as possible. It is for this same reason that the ideal audience member is unemployed and recieves pocket money from their parents, because they are of a young age. This is also likely to be the reason they are single, that and the fact that Little Mix's songs are more about homosocial, female-bonding relationships than hetrosexual relationships. Their music is platonic and not highly sexualised. The ideal audience member is likely to be Athiest because they are not yet at an age to be well informed enough to make a strong religious decision about their lives.

We can gather the idea that Little Mix's fans are stereyotypically younger girls. This is because they are a very mainstream group so their music reaches the radio and music shows. For the younger generation, who are not as confident streaming music online, the radio is their main source of music. This is why it is an accurate to say that Little Mix has a young fanbase. It is also easy to assume that most of Little Mix fans are girls. This is because every memeber of the band is female, so the people who can relate to them and their music are more likely to be girls. The evidence I have found of this is the Little Mix Fan Page on YouTube. the person who is running this account has liked such channels as 'Cute Girls Hairstyles'. This makes it likely to assume the person who is running Little Mix's own fan site is a girl herself.
Powered by